The luck o’ the Halfling 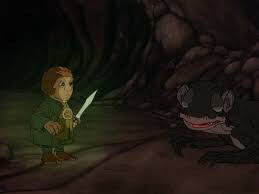 I have two halflings in my game that I DM now and like to make luck feature a little more interesting than just simply mindlessly rerolling natural ones. To be clear, I think of natural 20s as successful opportunity meets preparation kind of payoffs. But for the lucky feet, I think that despite failure the odds are still in your favor anyway. Here are some creative ways to use luck!

Strength – you attempt to heave the loot past the ogre cave and into a safe distance around your allies. You pull the bag and it tears open leaving the gold coins scattered on the ground. Oh look. Someone missed this ruby worth 500 Gp with magic abilities. Looks like I could pocket this for now…

Dexterity – you reach your hand to untie your self from the guards mount. Your hands slip as you spook the horse. Now you are charging ahead at the mercy of the steed. Oh well, at least the guard didn’t notice you gone … yet.

Acrobatics- You slip on the stoney crevasse, plummeting to your 5d8 damage! Whoops! Your pants catch on a wicked root protruding out of the cliff side. A little help?

Perception- your eyes peer out into the darkened wild keeping watch for your allies. A bloodthirsty owlbear sneaks up on you but at the last minute while relieving your self near a tree you cast thamatury on your body fluid making the noise sound like thunder. The owlbear heads for the hills.

Investigation – You inspect the hallway for traps. Looks like the coast is clear y’all! Only to literally walk the path to disarm the trap as designed and intended. Ahhh, I’ll just keep that to myself.

Investigation – You read through the text searching for clues, anything that would show the way out of the castle. Nothing! Darn! Oh wait , a love letter from the lord to the mayor. Looks like I found me a little blackmail.

Deception – You attempt a little trickery into getting the ferry master to allow you passage. But your disguise begins to melt away as the sun ascends into the sky. Poor ferry master though, he thinks you diseased and will do anything you want, just don’t poison me with Waxface!

you fumble and miss your target, but land your weapon into another nearby enemy causing damage to that new target instead.

You swing your blade and watch it slip from your sweaty grip – only for it to catch another target square in the chest nearby.

You let loose an arrow completely in the wrong direction, your enemy laughs at your ineptitude and steps closer in confidence only to walk right into a natural trap – sealing the same damage as your weapon! Haha! Who’s laughing now?

Your hand axe spirals through the air, bouncing off the shield of your friendly ally! Sorry friend! This causes your ally to immediately spin around catching the edge of an enemy noggin. Roll for damage!

Spell attacks – your fire bolt leaps from your fingers arching high over the enemies head. Lo! The flames caused a branch to catch flame and fall to the ground, roll for damage! 🔥

A sickening ray shoots from your palm, fully intended for your target at a distance. Oh no! Darn that magic, it’s spiraling out of control but lands on a nearby attacker with only enough HP left to be reduced to 0. Well, that was nice.

Hope you enjoyed this!