This week on the Lost Mine of Phandelver our travelers, with goblin prisoner in tow, trekked through the crude trail through the Neverwinter Wood on their way to the alleged goblin hideout. As they headed out, Meric stood still, the stout halfling form in the forest.

“You go on without me. There’s something peaceful about last night that I need to explore. Something is calling me to stay and involves more than chasing after goblins in the woods. I don’t know what it is, but …”

“Say no more,” replied Elric, and he pushed Fhedi the goblin ahead of him and began walking on the trail.

Meric resumed his pose up in the tree the night before, closed his eyes and focused on the rising sun in the east.

“Ugh!” exclaimed Kelfborn, “it’s a snare. The forest gnome stood their, scimitar in hand with a rope secured around his ankle. A quick reflex and cut through the cord kept her from becoming the victim of a goblin trap. “I bet there is another further in,” and before long, they came across an already activated pit trap, capturing a small white rabbit 10 feet below.

“Oy! Are you just going to stand there or get me out?” cried the surly beast. Kelfborn instinctively understood every barking order the rabbit gave. She explained the situation to the team, who of course, were already moving beyond the pit, not seeing the concern over this woodland creature.

“We could call him “Dyner,” Perrin slyly remarked. His grin began to appear as he stroked his chin, pretending to contemplate.

“Oh, let’s move on!” Nissa broke the inactivity and invoked mage hand scooping the rabbit up (uttering terrible curses so the gnome heard) and released the creature bolting into the woods. “Any more traps?” she asked, looking towards the goblin. He had barely time to answer before a flash and smoke on a nearby tree caught Nissa’s eye. “Come on,” she pushed him forward off the trail, “you’re going first.”

A while passed as Nissa and Fehdi wandered off the trail. When she returned, Nissa had a dark look in her eye. “The Traveler communicated with me.” Even as she uttered these words, the forest went silent, as if listening to see if she would reveal the message. She turned towards the trail and began walking, muttering under her breath, “beware of…what?”

Before the party lay the mouth of a ominous cave. Naturally delved into the mountain, a shallow stream spewed out alongside a rugged path. While wondering if guarding presence remained an obstacle into the entrance. Rather than taking a stealthy approach, Kelfborn shouted out “anyone there?” consequently waking two goblins hiding behind a brier patch. Instantly two arrows shot past Perrin’s head. “Praise Kelemvor, I live another day!” he exclaimed. Within seconds, the party, as one, rushed the goblin defense. Elric charged his firebolt without flinching and launched it zinging past one of the guards, taking off his right ear.

As soon as the warning shots fired past Perrin, Nissa took it upon herself to secure their guide as ransom. Recalling some information on knots she read in a book a couple years ago, “this shouldn’t be too hard, hold still,  you vermin!” In a flash, she had Fehdi completely restrained and positioned to watch this skirmish take place from a safe distance. Charging into the fray, she raised her quarterstaff, thinking to save her best spells for a real challenge.

In less than a minute, the team had completely scorched the goblins, mostly due to Elric’s and Perrin’s flames. Frustrated that this encounter took so long, the team hid the guards further into their bramble post and set out into the cave, only to hear the sounds of snarling wolf guards.

Kelfborn stayed back for a minute, surveying the canine guards, they seemed famished, thin gaunt wolves, chained to the rock in the cave shelf. Matching the motions of the wolves, she began to silently crawl towards the beast and said, “this will be easier if any of you have some meat.” The starving wolves gobbled up the meat and in their distraction, Perrin lifted the chains, and the beasts were freed. Kelborn then led them out of the cave and spoke in wolf tongue, “there’s a rabbit out there, go!”

Perrin scoffed, “so you’re ok the wolves eating Dyner, but not us?”

Kelborn still in wolf-mode, just acted to bristle her fur. A couple dried leaves fell to the ground along with an empty caterpillar cocoon.

No matter, Perrin, Nissa and Kelfborn approached the wolves den and found a chimney. The natural exit from the den served as a fire place leading up into, well, that’s what Perrin was good for. “Give me a boost,” he said. The chimney provided plenty of handholds and lead up and around for about 10 feet. Perrin thought it a good idea to extinguish his light cantrip. The bright glow from his sheild dimmed and in darkness he proceeded.

A new glow flickered towards the exit of this tunnel. He began to hear a voice, talking in solidarity. “Klarg is King of goblins, king of the worlds!”

“Just a quick peek,” and the halfling’s curly black hair appeared in the entrance to a large overweight bugbear’s lair. In the middle of the room sat a dire wolf, engrossed in her dinner, feverishly gnawing at a bone. A smoldering campfire was lit, providing light in this cavern with the smoke rising to release in cracks in the cavern ceiling. The fat bugbear sat amidst loot and supplies, unpacking them like a greedy child on Christmas morning. Neither seemed to notice the spy, so Perrin kept on observing. While Klarg (as he called himself in third person) played with a longsword, two goblin sentries came into the room from the north entrance.

“King Klarg, your majesty,” one interrupted.

“King Klarg is very busy,” snarled the oaf. “I can take a message for him.” and he began trade personalities acting as a member of his court.

“Fedhi hasn’t returned from his scouting excursion.” There was a brief pause of ignorance, so the other goblin spoke up,

“The scout hasn’t come back, what do you want us to do?”

“Ugh! Find scout!” Klarg was dropping his pretense and appeared sincerely angered. And he began to have a tantrum, the dire wolf looking up attentively. Both the goblins backed out of the room, excusing themselves between “yes, your majesties” and “of course sire!”

Perrin thought this a good time to exit his time in the smelly cavern and relay this to his comrades. But before he could finish a total description of the tale, a voice shouted from up the passage into the cave, “Fehdi! Where you been!? Get your sorry green ass back to Klarg with report!”

While the team was collecting intel, Fehdi was by now, untied and standing in the passageway. Within seconds, the team scrambled a makeshift battle. The noise caused the goblin sentry up the path on on the bridge to notice the trouble. Perrin saw the creature begin to scamper away, no doubt going for reinforcements. He channeled the divine energy and launched a holy flame of fire at the bridge incinerating right before the goblin leaped away. Unfortunatly, a cry echoed through the cave, “release the flood!”

Time slowed for the team as Kelfborn and Perrin, in melee combat with the two goblins and Nissa and Elric hanging back, firing away, and guarding their goblin captive. A surge of water rushed down the tunnel catching those in the path. Kelborn had a stoke of  luck. Turning around, she found three handholds and briskly climbed up the stone wall. The water grazed past her, soaking her boots, but she was able to resist the current. Perrin, however, still focusing on the flame and preparing for another strike, found himself caught abruptly in the flow. The two goblins carried along with him out of the cave entrance received most of the beating and their bodies went limp. Nissa and Elric leaned out of the wolves den and watch the flood rush past their feet, burying the stairs.

Outside the cave, Perrin lay flat, face on the ground. Looking up, he sighed, pushed himself up, muttered a prayer and said, “let’s try this again.” 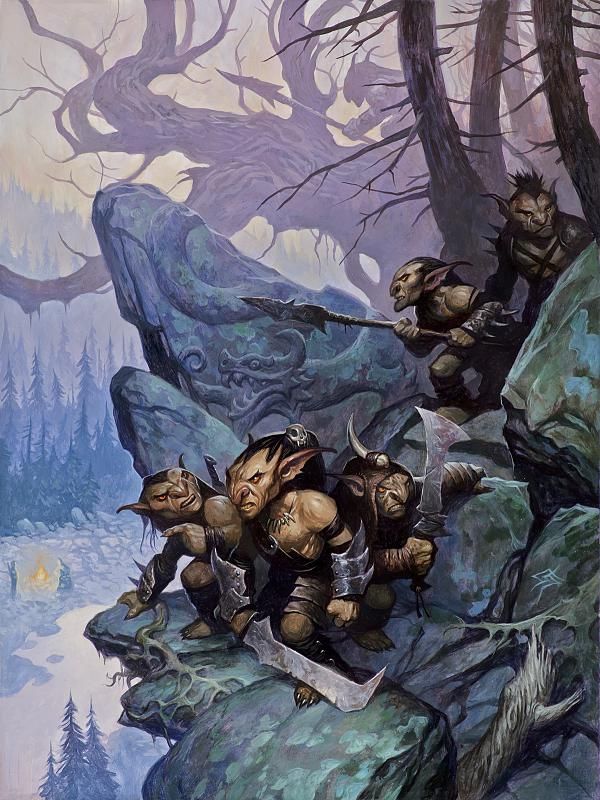 Images credits: Wizards of the Coast